Alliance for the Responsible Sale of Spirits - Responsibility Alliance 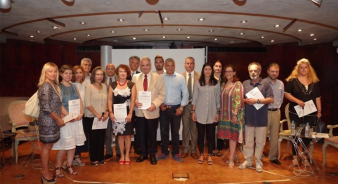 The “Responsibility Alliance” was launched on 28 June 2016 in Athens.  It is the first alliance of its kind representing the whole chain of production and distribution.  It is a voluntary initiative created by the Hellenic Association of Drinks Distributors (ENEAP) and the Greek Federation of Spirits Producers (SEAOP).  Members of the association are actors of the retail and on-trade sectors and/or relevant representing organisations as well as high profile NGOs, Academic institutions and Government organisations activating in areas of health prevention.

Members agree to play an important role in limiting the negative patterns that lead to thoughtless consumption; create the proper environment promoting the responsible consumption of alcohol and create a protective umbrella for vulnerable groups, particularly teenagers.  Representatives of the industry bodies and firms agree to serve and support the Alliance’s actions through their communication channels.  Social and institutional partners commit to provide counselling and certification.

2016: During the launch: Michael Kefalogianni, journalist; Antonis Sakellaris, spokesman for the Deputy Secretary General Public Health; Evangelia Kourenta, Director of Rural Policy, International Relations and Promotion of the Ministry of Rural Development; Argyris Peropakis, Deputy Head of the European Commission Delegation in Greece spoke.  “ΕΠΙΧΕΙΡΩ”:  30,000 recipients all over Greece.  The magazine is distributed to government officials, Embassies, foreign Chambers and the 1,750 members of the 59 Greek Chambers.  Athens Bar show: The two day event had more than 8,000 visitors, including at least 2,500 bartenders.  Website visits: From October – December 2016 the website had almost 6,000 unique visitors.

2018: 128 young people took part in the competition and 9 winners were chosen.

2019: The Responsible Alliance won the silver medal in the Communication Campaign category at the Hellenic Responsible Business Awards 2019 for the Let it be on me! competition.