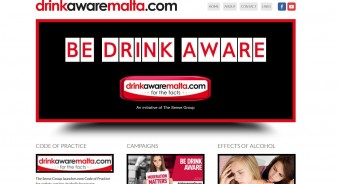 To promote responsible consumption of alcohol

The website was launched in November 2009 and revamped in 2012 to make it more attractive to target audiences and establish it as the foremost source for information on alcohol consumption.  It contains sections on: the Code of Practice for outlets serving alcoholic beverages, campaigns, the effects of alcohol on the body, tips and guidance for parents, responsible drinking and news. The Drinkaware Malta Facebook page and Youtube channel are also linked to from the website.

Awareness raising campaigns are regularly run to attract a larger audience to the site.

The site has on average fewer than 100 visitors per month.  The campaigns help to drive traffic to the site.