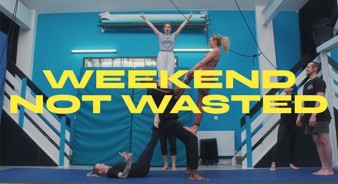 Weekend Not Wasted was a responsible drinking campaign targeting MTV’s social following of over 12 million fans and 52 million TV households across the UK, Spain, Denmark and Germany aiming to engage with them in a meaningful yet fun way.

The campaign presented an aspirational message about what becomes possible when you drink responsibly and “seize the day”, tapping into a growing trend of young people leading increasingly busy, jampacked lives who are looking to make the most of every moment.

It encouraged the audience to ask what they would do if, instead of spending the weekend nursing a hangover, they “seized the day” and tried something new.   The campaign challenged three presenters to do just that in a series of three videos featuring Becca Dudley, Harriet Rose and Samuel Eni.  The presenters “seized the moment” by taking up challenges - from an acro-balance course, orienteering through a forest without any technology and cooking a feast from scratch (Videos: introduction, cooking, exploring and acro-balance).

The series was rolled out online and on-air over four weeks in 2019.  The final week showed all three episodes concurrently.  It was promoted across MTV’s website, YouTube and social media channels, and across MTV’s local TV channels.

Launched at the start of June, the campaign outperformed reach targets while observed engagement showed a positive uptake of the message.

In total the content reached 25.5 million people across the five markets with 2300% uplift in awareness of DrinkIQ.  The average YouTube View Through Rate was 30% and episodes posted on Facebook achieved over 1.8 million post engagements and 49 million followers.

The campaign measured 107% increase in intention to reduce drinking in the future.  It also sparked the imagination of the audience across digital channels, with viewers tagging their friends in comments, suggesting and planning their own weekends not wasted.