There is only one alcohol 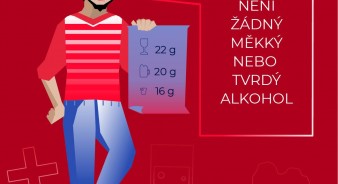 To raise awareness that all alcohol is equal: whether it be beer, wine or spirits

The face of the campaign is personified in the character of Pepa Vípil, whose name consists of the first letters of the words VI (VÍno: wine) PI (Pivo: Beer), L (Lihovina: spirits) underlining the fact that that all alcohol is equal.  Pepa Vípil aims to raise awareness of responsible drinking, facts about alcohol, common mistakes and standard drinks.  He underlines that it’s not what you drink but how much.  It doesn't matter if you drink beer, wine, or spirits, but how much you drink.  There is no softer or harder, better or worse, healthier or more harmful, alcohol is simply alcohol.  And it’s best to drink it responsibly!  The campaign was launched in November 2020 and is run on Facebook.  Reach will be available after it ends, mid-2021.

The campaign will run mainly Facebook, from November 2020 to mid-2021 under the umbrella of “Drinkwise”.

Reach will be measured by engagement on the Facebook posts.