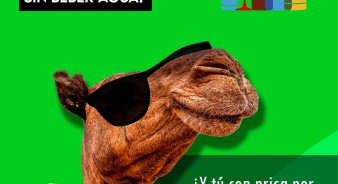 University students are taught about responsible consumption and spirit drinks before taking part in a competition to design their very own campaign to promote responsible drinking.  The idea is to use communication between equals as peer-to-peer communication is very effective.  Once the winners are selected an award ceremony takes place, where the winners receive their prizes, and a press release is issued in order to bring awareness to the project.  Winning entries are made available by Espirituosos España for municipalities and organisations to use, such as on their social media and logos.

PHASE ONE: Training in Responsible Consumption

PHASE TWO: Creating and presenting the campaign: Students work in groups over a six-month period to design a responsible drinking campaign targeting young adults or informing minors that they shouldn't drink any alcohol.  Students are supported by university teachers during the process.  When finalised, the teams chosen by the University present their proposal to Espirituosos España’s marketing committee.  The winner receives two prizes: A trip to some distillery and the pride of seeing their campaign launched!

2020-2021: The winners from the University Rey Juan Carlos developed a poster campaign to address underage drinking.  The students related curious and fun facts about animals to stablish a comparison between them and underage consumption.  The creatives are available during 2022, for use.

2019-2020: The 2020 winner is “Historias y punto” (stories of full stop).  The name of the protagonist “punto” is a play on punctuation and alcohol consumption that gives the double meaning in Spanish of “get a buzz”.  The visuals were adapted by Espirituosos España who added logos of the municipalities who used them.

2018-2019: The jury decided both finalists were winners.  The winning proposals are NoTanto (Not too much) and YoNoLoVeo (No Way).

So far, more than 900 university students have received training on responsible consumption.

2019-2020: Visuals were used by 10 municipalities and by other Universities (like Universidad de Huelva) to spread the responsible consumption message on their social media.  The municipalities have reported more than 40 different posts and more than 3,000 views of the campaign.

2018-2019: The posters from the NoTanto campaign are displayed on university campuses in Madrid to raise awareness among students.  The visuals from the YoNoLoVeo were used for Espirituosos España’s “Minors and Not a Drop” campaign and were shown on on-street advertising, buses and bus shelters in Madrid.  They were also used in 2021 by Metro de Madrid for their underage drinking campaign (Metro and the Alcohol and Society Foundation join forces against under-age drinking | Metro de Madrid (metromadrid.es)

2020-2021: Pre-and-post training questionnaires were given to the university students.

About their future commitments:

What they say about the training:

2018-2019: The training on alcohol helped to break false perceptions and myths held by many students.  The pre-training survey found that 90% of the students believed that young people drink too much.  However, official data shows that 95% drink responsibly.  This shows that the students did not know what “excessive drinking” is and that they lacked general information about alcohol and its effects before the training.

The campaign has been welcomed by the public institutions, and city councils outside Madrid are interested in developing similar projects in partnership with Espirituosos España.