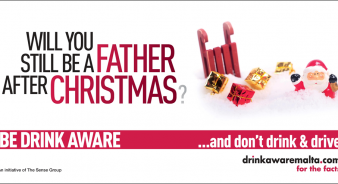 To create higher sensitivity of the importance of responsible drinking behaviour.

To raise awareness of the negative impact of binge drinking among young adults.

To educate consumers and influencers to talk about alcohol consumption more openly and directly.

The Drinkawaremalta 2019 campaign was a call-to-action inviting everyone who intended to enjoy the festive season with alcohol to keep their minds focused on what really makes a happy festive season: health, family and friends.

It was centred around hard-hitting messages aimed at prompting the reader to stop and think about the possible consequences and realities resulting from alcohol abuse.  Through a play on words, the reader was invited to reflect on not only their situation but also about those around them, and how this could drastically change through thoughtless alcohol abuse.  The idea was to have a campaign with hard-hitting messages designed in a way to make the reader stop to read the message twice.

Beyond urging people to avoid drink-driving, the campaign also encouraged those who abuse alcohol and their loved ones to sit down and have a “straight talk” on how to tackle the problem in a positive and supportive way.  It also encouraged people to keep an eye on family and friends who might not realise their alcohol habits could be dangerous.

The messages were shared on digital and social media and on outdoor billboards.

On Facebook, the best performing video posts reached between 94,651 and 137,223 people.  The campaign was also covered by 14 print and online press articles and visible on billboards across Malta.  A total of over 9,000 minutes of campaign videos were viewed over the course of the campaign.

An online quantitative research study of 350 respondents took place to assess the awareness of the campaign, drinkware portals and issues of alcohol abuse.  Findings show: