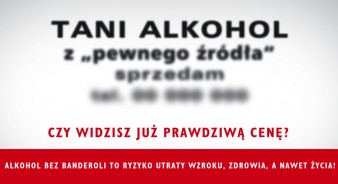 To increase awareness among Poles of the negative health effects associated with the consumption of illegal alcohol.

To increase awareness that buying alcohol from unknown sources (without strip stamps) can cost one's health or even life.

The campaign was a response to worrying data on the consumption of illegal alcohol in Poland.  The purpose of the activities was to make Poles aware that there is no “reliable source” of illegal alcohol and that any bottle of alcoholic beverage may contain substances which are health- and life-threatening.

It was run over August 2013 in 3 chosen regions: north, north-east and south-west. These regions were chosen because they report the highest rate of illegal alcohol consumption.

Outdoor and press ads were aimed at showing the message clearly and in an emotional way.  Mini-billboards were located near bazaars, markets and other areas where it is possible to buy illegal alcohol.  Buses also displayed full back billboards.  Posters were displayed near bazaars, markets, provincial offices, customs houses and at bus shelters and bus stations to reach “potential undecideds” (those who may have come across illegal alcohol in the target areas and wanted to buy it in order to taste or because of the attractive prices.

Groups of “average Poles” were targeted through small town local radio stations to widen the campaign range and the campaign included comprehensive PR activities directed at national media and bloggers.

100 mini billboards were displayed; 15 press ads were printed and 18 buses displayed a full back; there were 18 publications in local and national press and 83 publications online; 306 broadcasts were aired in 5 local radio stations and 1,900 posters were displayed.

Post campaign survey showed that almost half of respondents (45%) knew about illegal alcohol (alcohol sold without excise strip stamps).  In their view, it is usually bought in the bazaars or markets. They were reluctant to state their illegal alcohol consumption, but 17% admitted that they had been in contact with it.  3 out of 4 respondents stated that the main reason for buying alcohol from an unknown source is its low price.  They were aware of the health consequences of consuming illegal alcohol: 37% indicated a risk of poisoning or death (32%).  Only 7% were not able to identify any potential health consequences caused by the consumption of illegal alcohol.

The social campaign on the effects of alcohol was remembered by 12% of respondents.  Nearly half of saw the campaign in the newspaper (48%) and or heard about it on the radio (46%).  The campaign viewed positively by 91% of the respondents.  97% of respondents rejected the idea of purchasing alcohol of unknown origin in the future.