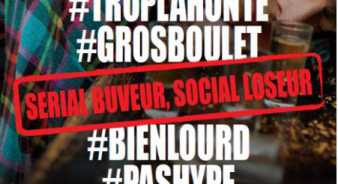 To warn 18-25 year olds about the dangers of "binge drinking" and its impact on social networks.

To educate and inform in an entertaining, realistic way without moralising.

The campaign built on the knowledge that the best way to motivate young adults to control their drinking is to show the impact on their image and reputation in social networks.

A humorous video against binge drinking, was launched by popular Youtuber Jimmy.  In it, he illustrates in a funny and offbeat way the negative effects that over drinking could have on your image and reputation.  This includes the risk of ending up with photos posted on social networks the next day.  Photos that we don’t remember taking and that make us feel uncomfortable.  He reminds viewers that it’s possible to have fun on a night out without drinking too much.

The website which supported the campaign is no longer active.