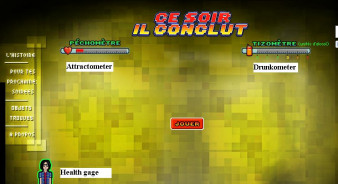 To enable the identification and awareness of situations and risky behaviours related to alcohol abuse especially in the target audience (18-25 year olds).

To communicate that it's best to control drinking in a fun way for a good night.

Launched on 29 September 2011, the serious game combined web-series and arcade game styles and built on the highly popular "Make your mind up Clement" video series. 100 mini-video footages were written, shot and assembled corresponding to the different possible combinations of actions / reactions that depend directly upon the amount of alcohol drunk by Clement.

In order to stir up curiosity in potential players teaser content was posted onto the webpage every day for 10 days before the launch and targeted advertising took place on relevant sites like Dailymotion, blogs addressing the themes of the game, student blogs etc. The game also had Facebook and Twitter accounts.

A 2011 evaluation based on 653 questionnaires showed that: