Responsible from the Start! 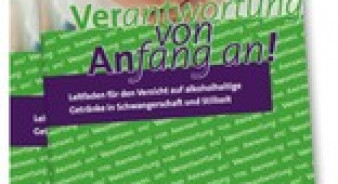 To promote abstention from alcohol during pregnancy and nursing.

Foetal alcohol spectrum disorder (FASD) is a non-diagnostic umbrella term used to describe the continuum of disabilities and congenital disorders resulting from prenatal alcohol exposure.  Included within this spectrum is Foetal Alcohol Syndrome (FAS).  Every year in Germany, some 4,000 children are born with FAS and another 12,000 are born with FASD.

BSI created the campaign because of this lack of knowledge about the risk of drinking alcohol during pregnancy.  Launched in 2009 the campaign aims to provide clear information explaining the dangers of alcohol for the unborn child.  It is backed by Dr Reinhold Feldmann from the Paediatric clinic and polyclinic at the university hospital in Münster (UKM) and FAS outpatient department at the outpatient clinic in Walstedde (who helped to create the FAS leaflet), the German Federal Drug Commissioner (who has signed the brochure since the 2nd edition) and the Parliamentary State Secretary in the Federal Ministry of Food and Agriculture (who has recommended the brochure in a letter to parents to be since September 2009).

Three leaflets are the core of the campaign:

The campaign is supported by:

The campaign is evaluated every year the latest evaluation shows: