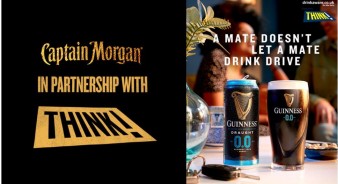 To tackle drink driving over the festive period.

To call on people to stop friends from getting behind the wheel after they have had a drink.

The latest data shows that 78% of drink-drive accidents involve male drivers or riders over the legal alcohol limit (Reported road casualties in Great Britain, final estimates involving illegal alcohol levels: 2019), and younger male drivers are historically over-represented in drink drive related road casualties (Think website).  The partnership saw THINK! relaunch its highly successful #PintBlock campaign which is aimed at this demographic.  The series of short films were redistributed across social media to remind young people that “a mate doesn’t let a mate drink drive”.  For the first time, they also directed viewers to a landing page on the THINK! website featuring “Wrong Side of the Road”, Diageo’s virtual learning experience which allows individuals to have a conversation with a real drink driver to help understand the consequences of drink driving.  By asking raw, honest questions viewers can hear first-hand about the emotional and physical impact that drink driving can have on drivers and the people around them.

Diageo amplified the campaign’s message with a series of digital activations across Captain Morgan and Guinness.  To land this message in a credible and authentic way, Captain Morgan partnered with influencer, presenter and reality tv star, Sam Thompson, to release 15, 30 and 60 second social assets.  In these short videos Sam Thompson ensures his friend doesn’t drink drive in an engaging way.  Guinness launched social assets featuring Guinness 0.0 (the new alcohol-free beer from the brewers at St. James’s Gate).  These encouraged friends to not drink drive this Christmas, and instead opt for a non-alcoholic alternative.

The initiative is part of Diageo’s pledge to change the attitudes towards drink driving of five million drivers by 2030, as announced in the company’s ten-year sustainability action plan Society 2030: Spirit of Progress.