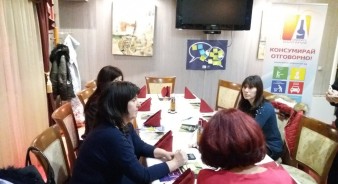 To address underage drinking by targeting parents and teachers of 10–11-year-old pupils.

To continue raising knowledge and awareness of the risks related to underage alcohol consumption and in turn to delay the age of onset.

To include institutions, media and schools in dialogue and prevention activities.

The programme was designed to prevent underage drinking through discussing the topic in an informal environment attended by psychologists, parents and teachers of children (9-12 years old).  The programme followed Bulgarian school year from September to May each calendar year.

Meetings were kept informal, so the atmosphere was conducive for the full participation of parents.   Meetings were designed to answer questions like “how and when to talk about alcohol?”and “how to start talking about responsible consumption, without falling into extremes or negation?”  They were mediated by the programme “angels”: Yana Alexieva (psychologist), Emil Jassim (teacher), Dragomir Simeonov (journalist), regional collaborators who were added to the team in 2017.  Training seminars were provided for teachers which were preceded by regional media interviews.

2016/2017 (October to May): 25 meetings took place in 6 cities (Sofia, Plovdiv, Varna, Bourgas, Vratza and V. Tarnovo).  The average number of attendees was between 15 and 18 per meeting reaching more than 400 direct contacts.  The total reach of the target audience was for 800-1,000 people.  5 training sessions for teachers (Sofia, Plovdiv, Varna, Bourgas, and V. Tarnovo) took place with an average of 25 attendees per session.  1 training seminar for psychologists (14 people present) took place.  Media coverage was similar to 2015/2016.  800 new handbooks, 300 certificates, 100 posters, 800 invitations and 1,000 stickers, 500 brochures for parents, 300 brochures for teachers/psychologists and 100 posters supported the campaign.

2015/2016 (September to May): 25 parental meetings took place in 5 cities (Sofia, Plovdiv, Varna, Bourgas and Vratsa), reaching a total of 358 parents.  Since information is shared with family/friends the number of parents who were informed about the meeting/its topics could be 800-900 people.  5 training seminars were attended by 172 teachers in total.  Since each school has about 12 to 16 primary teachers, the information was circulated to 300 to 400 of them.  500 new handbooks for parents and teachers as well as 300 certificates and 1,000 stickers were distributed to the target group.  http://predi18.org had 6,006 unique visits from Sept 2015 - May 2016.  102 publications in national and local media (covering the press-releases submission and media interviews before each training seminar).

2014/2015 (from September to May): 8 meetings with 8 different schools in Sofia. 13 classes (3rd and 4th grade) participated and over 200 parents, 22 teachers and 4 psychologists took part.  500 handbooks for teachers and parents were distributed.   The predi18.org website had over 1,000 unique views.  Over 22 publications/interviews in print and online media, radio and television.

2012/2013: 4 workshops in Sofia with teachers. 1 press conference to launch the programme, attended by celebrities.

2018-2019: Achievements were evaluated both quantitatively and qualitatively. Results show that the maximum rate of quantitative expectations were reached (for a 3rd year), therefore there is no urgent need of doing it in the future:

2017-2018: Achievements were evaluated both quantitatively and qualitatively.  Results show that:

2014/2015: Evaluated by an external independent evaluator.  Results show that: 100% confirmed that they would hold this type of meeting with the help of the school psychologist and without the involvement of external experts.  Also, teachers were willing to share their experiences with other colleagues from the same or other schools.  90% of parents who took part had a conversation with their childr(en) about alcohol following the meeting.