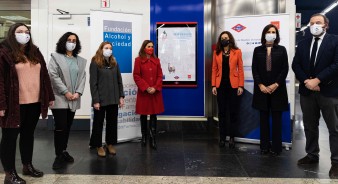 To delay the onset of alcohol consumption and reduce the number of underage drinkers.

To raise awareness of the effects of underage drinking.

The Alcohol and Society Foundation, in collaboration with the Regional Madrid Government and Metro Madrid displayed posters in the metro with the “Alcohol and minors.  No way” message.  The posters were displayed between February and May 2021.

The winning creative idea used in the campaign was developed in collaboration with students from the Rey Juan Carlos University.  Therefore, the message has been developed by equals, resulting in an effective and powerful message.

The creativity used, represents a situation in which a Llama is standing by the Sol metro station, which as we know is a highly unlikely situation, under the campaign`s message “Alcohol and minors.  No way”.

The campaign was presented and supported by María Eugenia Carballedo, Minister of the Presidency of the Community of Madrid; Silvia Roldán, CEO of Metro Madrid; Bosco Torremocha, director of the Alcohol and Society Foundation; and Silvia Jato, director of Institutional Relations of the Fundación Alcohol y Sociedad.

66 metro stations across all 12 metro lines displayed the visuals.