Drink with your head 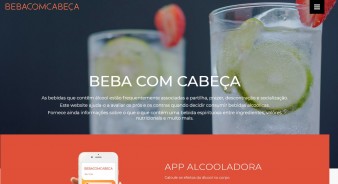 To promote responsible consumption of alcohol especially among the 18-40 age group.

To raise awareness of the alcohol unit as the best means to promote moderate and responsible consumption.

The website is promoted through posters and billboards, and, in the press and commercial communication by supporting companies.  In December 2009 Express TV posted the campaign’s promotional video on YouTube.

In 2017, the “A Noite É De Todos, Beba Com Cabeça” (Everyone’s night, Drink with your head) in cooperation with Lisbon Municipality aimed at fighting public binge drinking on Streets.  Every weekend during 2017, representatives met young people on the streets of Lisbon to share responsible drinking messages. Photos were taken and posted on the website's Facebook page to reach a wider audience.

In 2020, ANEBE challenged students from IADE - Faculty of Design, Technology and Communication at the European University to work on an application that would be used by young adults when they go out at night.  The resulting Alcooladora application was developed by IADE University student Bruno Costa as part his final degree project Computer Engineering.  The app was launched on 13 March 2020 at the Talkfest in Lisbon.

Wine companies such as FINAGRA

2020: The app has been downloaded more than 1,000 times from the Google Store since March 2020.  For the student, developing this application was a way of “gaining a lot of technical knowledge on Java-Android language”, but also of “getting to know a lot about the functioning of our body and the effects of alcohol on it”.

As of 1 June 2009, all ANEBE member companies display the logo and website address on all commercial communications.

Results of a study conducted in March 2009 (842 participants) shows that: