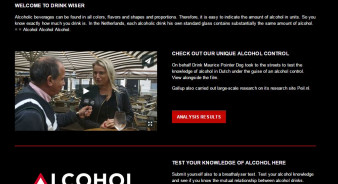 To raise awareness of the Dutch guidelines on low risk levels of consumption.
To provide information on alcohol products and to eradicate the various misconceptions about alcohol held by the Dutch.
To enable people to be more aware of their consumption levels, both inside and outside of the home.

The responsible drinking campaign was launched in December 2011 as a response to research showing that the Dutch are not well informed about alcohol (see pre-campaign research below).
The campaign comprised of a website, information communications and an application.  The application was removed for download in 2013 when the campaign was re-launched.
The re-launch took place with premium displays and small icons that were displayed on social media.  The first activation was visible between October and November 2013 and the second from the end of December to the beginning of January 2014.
The updated website contains four sections:

Pre-campaign research was carried out by Panel Wizard (1071 respondents) and showed that:

Half thought that a standard glass of whiskey had more alcohol in it than a glass of wine, beer or gin.  37% thought that two glasses of wine contained as much alcohol as one glass of spirit.
Approximately 62% of respondents were unaware that standard measures of beer, wine, and distilled spirits all contained the same amount of alcohol.
Almost half thought that spirits were more harmful to their health than wine or beer and 70% thought that red wine was better for their health than white wine.
39% very regularly drank five or more drinks per week at home.
53% preferred to drink at the weekend.