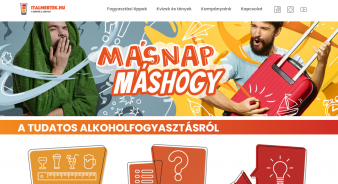 To inform consumers about low risk levels of consumption and to promote a shared understanding of what it means to drink responsibly.

The website was launched in June 2008 accompanied by the distribution of leaflets explaining the "2340" guidelines.  Also in 2008, a radio contest to test consumer understanding of the "2340" concept was run during the Autumn and a stand was set up to introduce consumers to the "2340" and "designated driver" principles during the August 2008 Hajógyári Sziget Festival, as well 3 others.

In 2010 the concept was revamped and the “Italmertek” (drink unit) slogan was launched and a new website was created.  The website was again updated in 2021.  It contains a section on responsible consumption, a quizzes and facts section and a section on campaigns.

The messages are communicated and measured by GFK, an independent organisation, (and before that by Gallup).  A representative survey of 500 consumers in January 2015 shows: