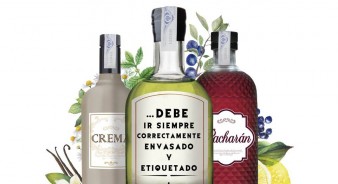 To raise awareness of the harmful impact and the risk of consuming unlabelled alcoholic beverages.

To inform the consumer about the law and the obligation of bars and restaurants serving alcoholic products to comply with it.

To ensure the traceability of spirits and the avoidance of practices that limit the right of consumers to information regarding the products.

Although the law regulates the presentation and labelling of alcoholic beverages it is common practice for restaurants to serve a free after meal shot in an unlabelled bottle.  They reason that buying a cheap 5 litre bottle and then transferring the contents to smaller unlabelled bottles is a good way to save money.  Indeed, 80% of consumers assert that they have been served alcohol this way although 67% do not know that the law prohibits this practice.  Consumers also appreciate the practice as they feel that the drink is better quality as it is “homemade”.

Therefore, the campaign is not only targeted at consumers but also at the owners of bars and restaurants:

The campaign was launched in three phases:

The was also excellent results in the El comidista blog which exceeded the impression target by 518.25%.  In addition, publications on El comidista’s social media (YouTube channel, FB and twitter) were placed without charge providing an 36 additional hours of presence.  This gained a total of 16,692,760 impressions.