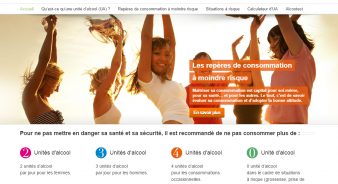 To inform consumers about the WHO's low risk levels of consumption.

The campaign aimed to raise awareness of WHO guidelines on consumption: no more than 2 units a day for women, 3 for men, 4 per single session and 0 at least one day a week and for ''at risk'' groups of consumers, such as minors, drivers, pregnant women, etc (in line with WHO guidelines).

The dedicated website contained the core campaign message as well as practical information on alcohol such as what a unit is. Online tools were available to calculate how many units of alcohol had been consumed and estimate the BAC level in order to avoid driving over the limit.  A Facebook page regularly posted to remind followers about responsible consumption.   The site was revamped in 2014 with a more modern look and feel.

A booklet was also created for the general public which explained what a unit of alcohol is, a reminder of sensible drinking levels and the address of the 2340 website.