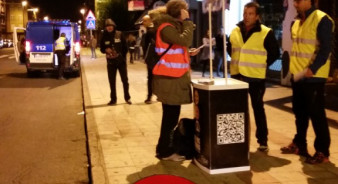 Spain was one of the first countries to join the Pan-European designated driver campaign in 2001. The “El Lince, Programa un conductor cada noche” evolved over the years to become “Noc-turnos”.
In 2015, the programme was renewed and a new way of promoting the designated driver developed.
During on-site promotions, trained monitors accompany local police.  The monitor waits for the police to carry out a breathalyser test with the driver.  If the driver has an alcohol level of 0.0, the monitor rewards them (for example with a 20€ fuel voucher.  All the awards must be claimed on the Spanish responsible drinking website, in order to interact with the target group in a more personalised way.  Monitors also give the driver's friends, that go in the car, information about responsible drinking.

In 2017, 10 events were held by FEBE in cooperation with different municipal police officers in which more than 300 drivers with 0,0 BAC level received a 20€ petrol brochure.

In 2016, 7 events were held by FEBE. It reached 500 young adults and generated more than 1,400 online and social media impressions.

In 2015, 3 events were held by FEBE and one by a municipality (Cádiz, León and Badajoz).

In 2017, young people who took part in the programme answered a questionnaire: 97.5% considered the information received to be interesting and useful. 74.5% reported to regularly consuming alcoholic responsibly.  This percentage rose to 88%, when only designated drivers are considered. 59% of drivers were regularly designated driver.  68% stated that they intended to continue the practice in the future.