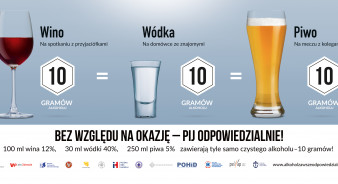 Pre-campaign study: Research was carried out to test the Polish approach to alcohol consumption in May 2016.  The aim was to examine:

The research was published in the “What do Poles know about alcohol?” study.  Amongst others, the study reveals that Poles do not always know how much pure alcohol they drink and that the idea that alcoholic beverages can be more/less healthy and dangerous/harmless is a common misperception.

Campaign: The research findings prompted the “Alcohol.  Always Responsibility” campaign.   It aims to inform consumers that different types of alcoholic beverages contain the same amount of pure alcohol depending on their alcohol by volume (ABV) and the quantity being served.  It also emphasises that ethyl alcohol, regardless of what the drink is, always acts on the body in the same way.  Therefore, every drink containing alcohol shopd be treated responsibly.

Actions: The communication campaign started in June 2016. In 2016 key messages were distributed through:

In 2017 "Alcohol. Always responsibly” messages were communicated through:

In 2019 different aspect of the campaign was promoted under the hashtag # zTwarzą (#save your Face). We wanted to show how the behavior of the person who consumed to much can be perceived. For this purpose, we cooperated with actors Michał Mikołajczak and Tomasz Ciachorowski. They have published short films in the form of instaStories from the event, where one of them is going over the line with drinking, and the other reports everything from the perspective of a sober person. This shows young adults, who happen to consume too much alcohol, that they are perceived differently than they think. They can speak too loudly, be bothersome, be intrusive or simply unhappy. It shows how easily you can “loose your face”.  Action was loudly commented in media and by social media.

In May 2017 an evaluation research was carried out with 1,485 respondents (CAWI - Computer Assisted Web Interviews). The evaluation showed that 20% of respondents came across campaign’s messages. Among them: